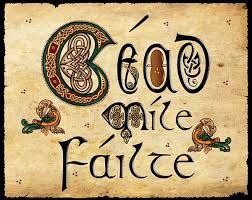 C’ead Mile Failte means A Hundred Thousand Welcomes in Irish Gaelic! Gaelic is the ancient and modern language of Ireland and is also my native language.  Irish was once the majority language in Ireland and its decline began under English rule in the seventeenth century. By the early 19th century, Gaelic as a spoken tongue had died out except in isolated rural areas; English had become the official and literary language of Ireland. The introduction of a primary education system, in which only English was taught by order of the British government while Irish was prohibited was one reason for the decline of the Irish language. The Great Famine (an Gorta Mór) which hit a disportionately high number of Irish speakers, especially in the Gaeltacht areas of the western seaboard, resulted in the deaths of over a million people and caused a tidal wave of emigration, which was also a major factor in the decline of the language.  By the turn of the century, only about one percent of the population spoke Irish Gaelic in Ireland. Most emigrants traveled to England, America, Canada & Australia and had to learn English to survive. I myself left my home in Connemara when I was sixteen and emigrated to England for work. Before leaving Ireland I remember having someone write out how to ask for a bus ticket in English and I practiced it over and over so that when I got to the bus station I would know what to say.

The late 19th century saw a renewed interest in the Irish language. Many writers and scholars felt that the Irish language was very important for maintaining an Irish identity. In 1893, the Gaelic League was established. Its main goal was to revive the Irish language and protect its status. It also promoted the development of  national literature, music, and theater. In 1937, with the birth of the Irish Constitution, Irish was declared the ‘first official language” of the county, with English being second.

Today, Irish as a first language is spoken mostly in the Gaeltacht areas of rural western and north-western parts of the country, where it is estimated that approximately 30,000 speak the language, while another million or so Irish people can speak more than just a few words. It’s wonderful to see the Irish language develop outside of Ireland. Keough-Naughton Institute for Irish Studies at Notre Dame University, The Center for Irish Studies at the University of St. Thomas in Houston and The center for Irish Programs at Boston College have excellent Irish study programs. The North Texas School of Irish Music in Dallas teaches the traditional folk music of Ireland. I was invited to perform there this past Christmas and it was so heartwarming to hear American children speak and sing in Gaelic. In Canada, St. Francis Xavier offers a Celtic language program with the literature and history of the Celts from about 800 BC to the present and Memorial University of Newfoundland teaches an Irish Gaelic program. Newfoundland remains the only place outside Europe that can claim a unique Irish name (Talamh an Éisc, meaning Land of the Fish). Tamworth, Ontario, is also home to the first Irish Language speaking area, or Gaeltacht, to be announced outside of Ireland. This is an important symbol of hope for the struggling minority language. Plans for the site include cabins to house upwards of 100 people, classrooms, and a museum.

It is my hope that the Gaelic language continues to flourish, both in Ireland and around the world. Several years ago, my brother Patrick and I recorded a video known as A Night In Gaelic  It was filmed at O’Flaherty’s Irish Channel Pub in the French Quarter in New Orleans. I am currently in Nashville, Tennessee, recording a song I have written in Gaelic and have plans to do an entire album in Gaelic. In my children’s programs, I teach the kids how to count to ten in Gaelic, and they always love learning a new language! If you are interested in learning the language, visit your local college or university or click on the links above. As well, there are many online programs available. In May, 2016, I will be leading a tour to Ireland and will visit the Gaeltach area where Gaelic is alive and well. There we will meet with seanchai ( storyteller, pronounced sha-na-kee), learn how to Sean-nós dance (an older style of traditional solo Irish dance), and so much more. Details can be found by clicking here!

There is one comment on C’ead Mile Failte…Ever Wonder What It Means?