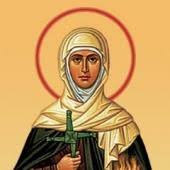 Imbolc, also known as the Feast of Brigid, will soon be upon us. On February 1, we celebrate  the arrival of longer, warmer days and the early signs of spring.
Saint Brigid of Kildare (also known as Bridget, Bride, or Brigid of Ireland) rivals St. Patrick for premier saint status in Ireland. Her ability to intercede with God for special favours in legendary. Born near Dundalk in Louth around A.D. 450, Brigid was born to a pagan chieftan believed to be named Dubhthach. Her mother was one of his slaves, and Brigid herself was born into slavery. One of her many chores was milking her father’s cows, and churning the milk into butter. She poured gallons of milk and churned pounds of butter and gave it to the poor so that they would have something to eat and drink. The miracle was that the cows continued to produce milk for Brigid so that she could have milk and butter to give away to anyone who was in need.
Brigid is well known throughout Ireland for her ability to heal the sick or dying and was legendary in her compassion for them. She was especially gifted in her ability to cure minor aches and pains such as toothaches, earaches and headaches. Today there are some 15 Holy Wells said to be connected to Brigid. The water in these wells are believed to have miraculous powers to heal. I recently visited one nestled between the Cliffs of Moher and Liscannor. It is revered place of local pilgrimage  on the 1st of February, but really anytime of the year you can see people visiting. Whenever I visit, I bring home several bottles of Holy Water for anyone who believes in the healing powers of the water.
When Brigid took her vow to become a nun, it is said the wooden alter in Kildare came to life, and flowers and leaves sprouting from it. To this day, it is believed to hold healing properties, and many people continue to make the pilgrimage to there to be cured of various illnesses. A fire burns in the Kildare chapel to this day, and some say it has burned continuously since the day Brigid died. 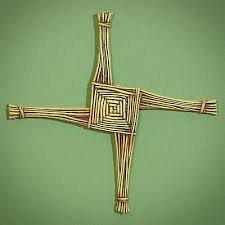 One of the most widespread Irish customs associated with St. Brigid/ Brigit is the making of the Cros Bríde ( St Brigid’s Cross). On February 1st, many Irish people will adhere to an ancient tradition of making St. Brigid’s Cross and placing in their home, usually above the door. It is believed the cross offers blessings to all who come in or go out, and it also protects the home from fire and illness.

Another custom we celebrated in Ireland was to eat “Boxty” on St. Brigid’s Day (click for recipe). It’s a traditional Irish potato pancake and the word is from the Irish “Bacstai” and refers to the traditional method of grilling over an open fire. 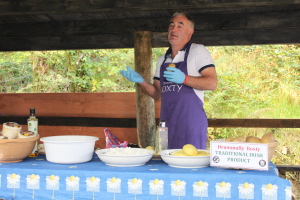 One my most recent tour to Ireland this past September, we spent a beautiful day in Carrigallen, Co Leitrim. This is where Margaret of New Orleans was born on Christmas Day, 1813. The town of Carrigallen  welcomed our group with craft people, music, songs, dance, drama and art. Above is a photo of one of the many talented people from that area making Boxty for us. And let me tell you, it was delicious! I can’t thank these people enough for everything they did for us. We ended the day with a delicious meal and even more dancing and singing. It was a truly incredible time.

So on Febuary 1, as you welcome the start of spring, I hope you will take a moment to think of St. Brigid. Perhaps you can start a new tradition of making a cross in her honor, or cooking some boxty for supper!

There is one comment on Feasts and Festivals: St. Brigid’s Day