The Pink, White and Green of Newfoundland 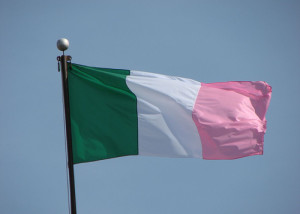 The Pink, White and Green flag is one of the oldest still-recognized symbols in Newfoundland & Labrador. It predates the Irish flag by several years, and is the oldest flag in the world to use the color pink. The first documented reference to the tricolor is when St. John’s captain Walter Dillon flew the flag from the mast of his schooner, circa 1845, as he sailed between St. John’s NL, and Waterford, Ireland. In 1848 the schooner was moored in front of Thomas Meagher’s merchant premises. Meagher, who had been born in Newfoundland, was then the Mayor of Waterford.  His son, Thomas Francis Meagher, gave Ireland its own tricolor –the Orange, White, and Green, believed to be inspired by the Pink, White and Green! Thomas JR. was eventually deported to Tasmania, escaped to the United States, and ending up as Governor of Montana!

The pink, the rose of England shows,

While in between, the spotless sheen

of Andrew’s Cross, displays the white.

Then hail: the pink, the white, the green,

The NL Tricolor is believed to be the inspiration behind the Irish Orand, White and Green

Our patriot flag! long may it stand. –

Our sirelands twine, their emblems trine,